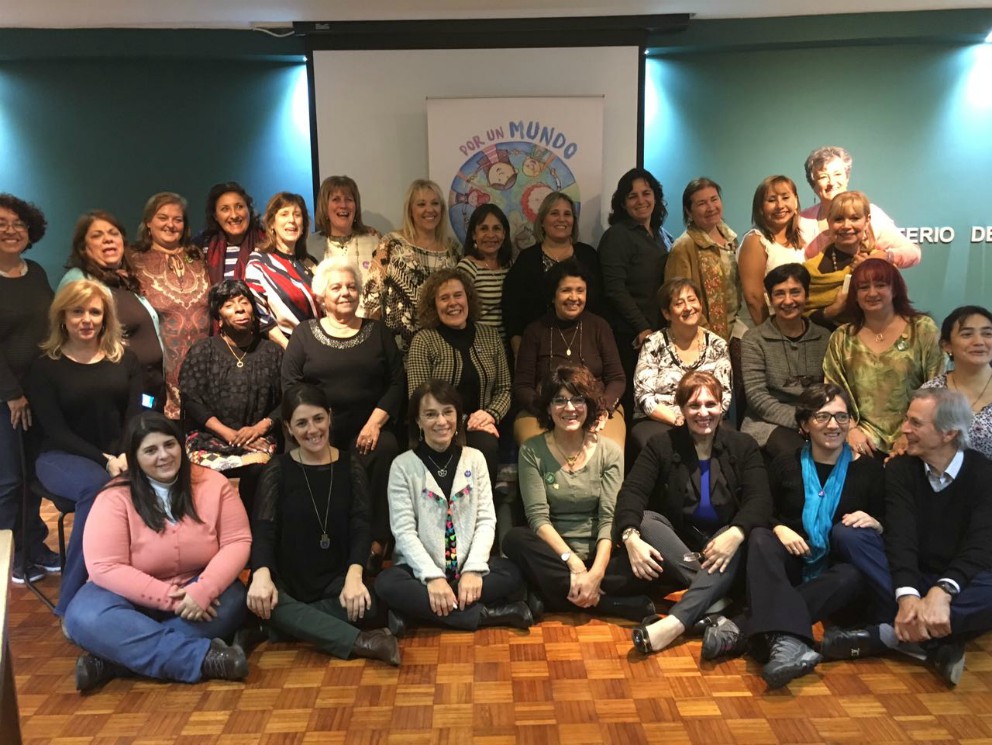 On this occasion the meeting was framed in the format of a regional seminar, which not only contributes to the discussion but also to the construction of common ideas and to strengthening as a region.​
On Friday, May 12th, the representatives visits were made to Early Childhood Centers. All activities were declared of interest by the Ministry of Education and Culture (MEC), the Ministry of Tourism (MinTur), the Central Board of Directors (CODICEN), the Education Training Council (CFE) and the Initial Education Council Primary School (CEIP) of the National Administration of Public Education (ANEP). They were implemented with the collaboration of the National Commission of Uruguay for UNESCO and the Coordinating Council for Early Childhood Education (CCEPI) of the Eastern Republic of Uruguay.​
As a result of the Assembly, the Declaration was signed: “Urgent appeal to consider care and education as inseparable in early childhood public policies”​
The document available in Spanish, English and French.
http://www.omeplatinoamerica.org/2017/05/25/declaracion-de-la-asamblea-latinoamericana-de-la-omep-2017/
Read more  www.omeplatinoamerica.org

It was held on June 20th and 21th, in the framework of the VII Latin American Congress JUNJI – OMEP “Learning Environments in Nursery Education from 0 to 3 years” that took place from June 22th to 24th, in the City of Santiago de Chile.
​Presidents and Delegates from Argentina, Bolivia, Brazil, Chile, Colombia, Cuba, Ecuador, El Salvador, Panama, Peru and Uruguay participated in this event, accompanied by 24 observers from different national committees. The opening ceremony was attended by deputy secretary for Parvular Education, Maria Isabel Díaz and the Executive Vice-President of the National Board of Kindergarten, JUNJI, Desirée López de Maturana. ​
The members who preceded this meeting were the President, Selma Simonstein and the Regional Vice President for Latin America of OMEP, Mercedes Mayol Lassalle.​​During the two days the reports of the national committees were presented, the local debates in the field of Early Childhood Care and Education (ECCE) were shared, the projects and activities carried out in each country, and the strategies, progress , trends and the difficulties facing the region. The importance of working for Early Childhood Policies was considered to be State policies and not government policies, and so on, followed and monitored. In this sense, and as part of the Regional Debate, it has been valued and compared with the Regional Vice-Presidency agreements with the Latin American Campaign for the Right to Education (CLADE) and the Inter-American Children’s Institute (IIN) .​
An advance of the project was presented: State of the Art, investigations and publications OMEP; a key tool for the construction of knowledge and a Latin American thought through Research. Management and management issues of the OMEP were discussed and the projects proposed from the World Committee and the forms of participation of the region were discussed.​
To know the project, State of the art visit: ​http://www.omeplatinoamerica.org/category/omep-virtual/estado-del-arte/
More information at http://www.omeplatinoamerica.org​

Third Inning:  OMEP  Latin American Assembly: Medellin, Colombia 2015 ​
“The identity of early childhood: curriculum and practices socio educational ” It was held on May 18th – 20th 2015. Medellin, Colombia.
​OMEP  committee of Antioquia, Colombia  with  the support of ACDEP OMEP Colombia and the coordination of the Regional Vicepresidency for Latin America of the OMEP. ​
Assembly  was carried out  with the participation of  presidents of eleven national committees, several observers of the different countries. The team of work of the committee host and the committee of work of Latin America led by Mercedes Mayol Lassalle, regional vice-president of Latin American of the OMEP. The event was organized in alliance by the University Instituto Tecnológíco de Antioquia, where most of the activities was carried out.​
As a result of the Assembly, a Declaration was adopted, and  affirm our responsibility to advocate for the right to education in early childhood, the promotion of comprehensive public policies and the implementation of actions to legitimize and give it centrality; recognizing that education is the basis to ensure the fulfillment of the other child’s rights ​
We invite you to read it, to be part of it and to spread it, so that the Right to Education of Early Childhood is a reality throughout Latin America’s childhood.​
The document available in Spanish, English and French.​http://www.omeplatinoamerica.org/2016/06/14/declaracion-de-medellin/
More information at http://www.omeplatinoamerica.org