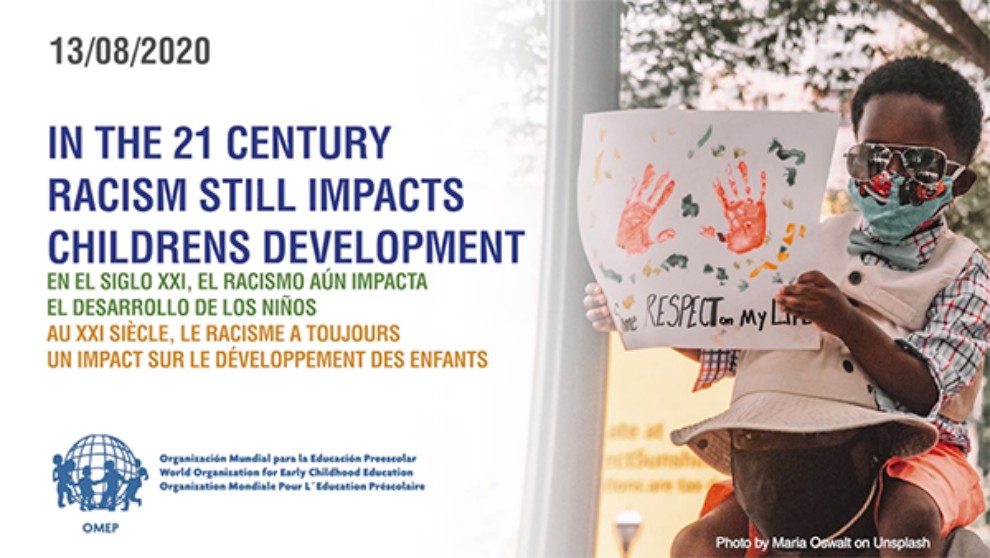 With eyes directed towards twenty-first-century possibilities for global understanding and peace, I initiate this brief discourse on the effect of racism on children’s development.  The twenty-first-century goal is for all (people) to sit at the table of humanity cloaked in the truth of one’s own cultural and historical realities, without apology.  The inclusion of various perspectives is a pathway to understanding and resolving human conflict.  However, racism is the fundamental impediment to this democratic ideal.  I envision a world (and I hope you do too) that acknowledges the African adage, within diversity there is unity.

Racism is associated with oppression.  It affects one’s self-perception and the perception of others in the world.  Racism impacts development and the contexts of development, even when, even when discrimination is only observed or perceived and not experienced.

Children as young as four or five years old have knowledge of many racial stereotypes and perceptions. They start to form biases about ethnic groups.  Although these biases may decline when children reach seven, they reemerge in preadolescence.  However, by seven years old, children do understand that an individual’s stereotypical beliefs can lead to engaging in discrimination.

Research findings indicate that only providing information on ethnic groups is insufficient to prevent discrimination.  When children in various learning contexts perceive discrimination, the result is slightly lower grades and increased negative attitudes.

Racial understandings emerge in children saying,” they don’t like my color”, to hopefully and eventually, when warranted making an attribution to discrimination and not to themselves.  Therefore, it is important for children to understand discrimination without overemphasizing it.  Attributions of negative feedback to discrimination instead of an inferior ability maintains motivation, self-esteem and the ability to effectively cope with negative outcomes.

The ability to perceive discrimination develops a strong positive racial/ethnic identity.  Individuals with idealistic notions of race relations, unfortunately, may be less able to cope with racial discrimination.  Also, when there is a lack of understanding about racism, discrimination is discounted, leading to a poor or weak exhibit of empathy.

Additionally, racism affects children’s physical well-being, even the well-being of the unborn child.  Racism can lead to chronic stress resulting in changes in hormonal levels, which can cause inflammation-a beginning indicator of various diseases.

Systemic racism negatively impacts the contexts of children’s development.  Systemic racism exists when one racial/ethnic group compared to another, consistently has a lower income (i. e. despite similar education), for instance.  Another example is that there may be consistency in experiencing poor(inadequate) schools, poor (inadequate) health care, more unemployment or underemployment, less opportunities for homeownership, higher mortgage interest rates, less access to clean water, more school suspensions, and more incarceration.  Consistency of one or more of these disparities places a greater strain on families and, therefore, greater strain-filled experiences within the context of children’s development.

Racism negatively affects development and impedes the twenty-first century ideal of worldwide understanding and peace.  As mothers, fathers, sisters, brothers, cousins, uncles, aunts, godparents, and grandparents, we cannot breathe as a global family until the disease of racism is eradicated.

A remarkable advance in the rights of the world