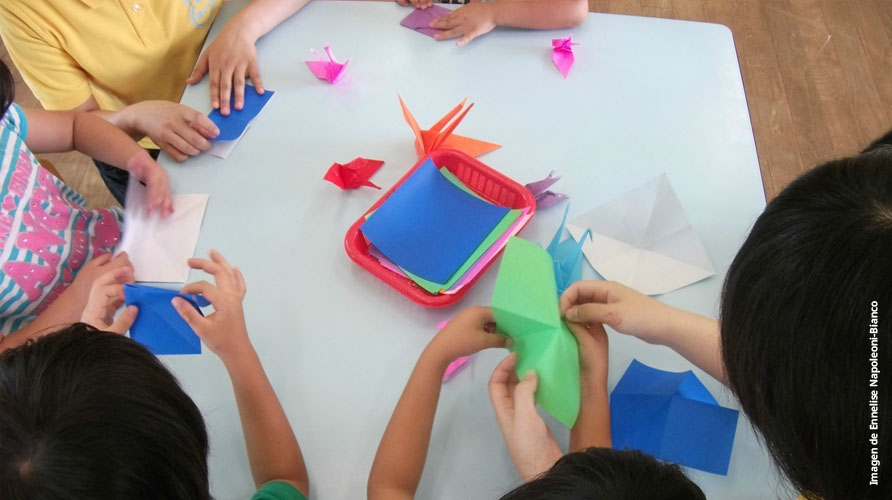 Cranes have been considered as a symbol of long life, and bringing good fortune in Japan and Asian countries.  Therefore, people have folded each orizuru (paper crane) with prayer for one’s recovery from illness, and sent the one a bundle of a thousand orizuru putting together on a string.   The orizuru has become a symbol of world peace derived from the real story of a girl who was exposed to radiation of the atomic bombing (A-bomb) in Hiroshima.

The girl, Sadako Sasaki, experienced the A-bomb dropped on Hiroshima, and exposed to the radioactive black rain aftermath the blast when she was two-year-olds.  About ten years later after being exposed to radiation, she was diagnosed with leukemia and hospitalized.  Inspired by the goodwill of high-school students who had donated orizuru to the hospital, Sadako started and continued to fold over 1,000 paper cranes until the day she passed away.  Sadako’s former classmates had campaigned to raise the funding to build the monument to console the spirits of Sadako, the children like her who had suffered and lost their precious lives due to the A-bombing as well as being victims due to various kinds of conflicts throughout the world.  In 1958, “the Children’s Peace Monument (Genbaku no ko no zou) ” was unveiled at the Peace Memorial Park in Hiroshima.

The orizuru has become a symbol of building world peace, and has offered to the monument over millions of orizuru each year from all over the world.

Young children in Japan play with origami (folding paper), which is one of the Japanese traditional plays, at kindergartens and day nurseries. Thus, the children are familiar with orizuru from their very early years of lives, and have known the orizuru as a symbol of pursing peace.  Children and adults are aware of orizuru which would bring the message for arriving the peace all over the world.

In Japan, “Peacemaking exhibition” has been held in Hiroshima, Nagasaki and many cities with peacemaking works of children in summer.  In Fukuyama City, Hiroshima-prefecture, held a “Peace appealing exhibition” every year since 1999, to collect and display the works of various kinds of cranes (e.g., pictures, posters, calligraphies, and origami paper) by the children of day nurseries, kindergartens, elementary schools and junior high schools. Prof. Oba (winner of ESD Award 2019), the board of Japan OMEP, has gotten involved in the activities.

The messages of orizuru has spread not only in Japan, but also around the world. For example, over six hundred orizuru, folded by the Japanese study group members in Reggio Emilia, Italy, were offered to citizens (children and adults) of the city at the main Piazza related to the event of  celebrating World Children’s Day, November 20, 2018 to remind of and declare pursuing peace, and pledging to guarantee education and care for young children.

The opposition of peace is not only war, but also the presence of poverty, segregation, natural disasters, and pandemics such as COVID-19.  We, the members of OMEP, have dedicated ourselves to work for the best interests of every child, and to make an effort to build peaceful society and the world.  The most vulnerable victims under the COVID-19 situations are young children.  The members of OMEP Japan are announcing for sending the spirits of orizuru to the world with our commitment for protecting and promoting the rights of the Children, and everlasting peace on earth.

The President of the Japanese National Committee of OMEP

board member of the Japanese National Committee of OMEP)