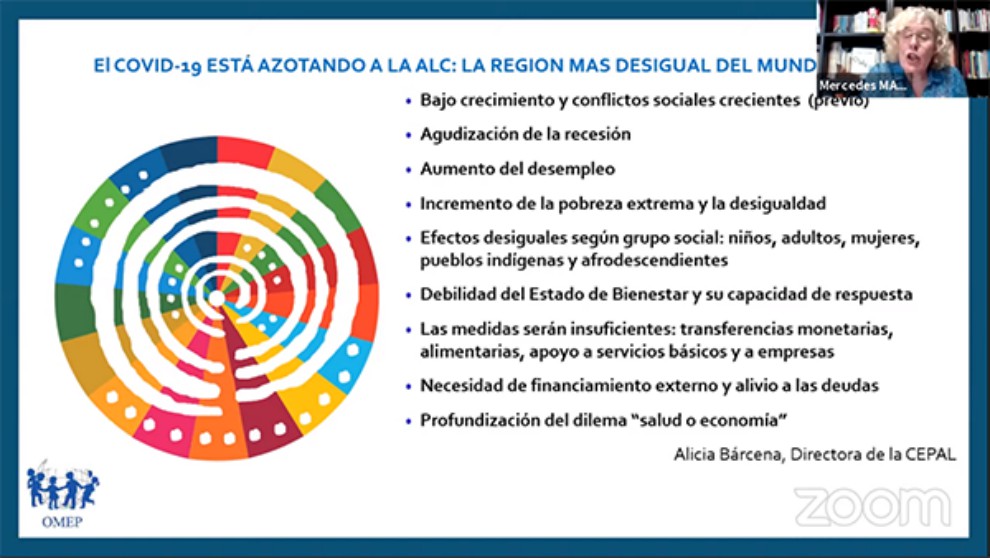 The World President of OMEP-Mercedes Mayol Lassalle, has been invited to the space “Other Voices in Education”  of the International Research Center, in alliance with  CEIP Historical of Argentina, RABLE Research Center of Clacso-Mexico; space that aims to train permanently in critical thinking through conferences, such as the one disseminated by Mercedes Mayol, in which she problematizes, shares her perspectives, experiences and knowledge built as early childhood education teacher and principal, university professor, and from OMEP’s perspective regarding the crossroads that crosses Early Childhood Education, due to the humanitarian crisis caused by the pandemic of COVID-19.

First, she proposes an appreciation of the context and situation of children in Latin America and the Caribbean, the “most unequal region “according to several reports such as the one from ECLAC, in which establishes some regional conditions and their implications for Early Childhood, a period from birth to age 8 as proposed by the Committee on the Rights of the Child, comprising 83,300,000 children in the region. Some of the conditions established by ECLAC are: low growth and frequent conflicts, deepening of the recession, increasing extreme poverty and inequality, unequal effects according to social group, weakening of the welfare state, among others that due to COVID-19 and not-so-strong states, have become more acute.

Other conditions that have been “put  in black and white”as Mayol Lassalle mentions, is the great housing precariousness in which thousands of families are going through the pandemic often, without state accompaniment in their indoor activities, nor possibilities of care for children facing poverty that go beyond food, and with “secondary consequences” sometimes unseen such as: fear, confinement, physical estrangement, lack of space for play, excessive exposure to screens and increased violence.

With regard to public policies of Education and Early Childhood Care, Mayol Lassalle outlines three characteristics: fragmentation in governance, its actors and laws that do not actually include children under the age of 4; inequality in access and quality, with fragmented budgets violating the rights of some groups of children; and the diversity of formats, scenarios and geographical scopes. Issues that lead to the design of education as a service and privilege, rather than a right (free and quality), “service” that commonly responds to basic care, academic results and standardized assessments. On this point, Mayol Lassalle highlighted that must continue looking for building pedagogically, taking into account the holistic and comprehensive approach promoted by the CRC, one of the pillars of OMEP’s work.

Regarding early childhood decisions in the context of COVID-19, Mercedes shares Luis Pedernera’s proposal on certain matrix or children´s images, evident in the decisions taken by governments and even NGOs in the face of the crisis. Response actions to the surprising pandemic, first of all, demonstrate being thought from an ethnocentric matrix (a specific and privileged type of childhood), a sanitarist perspective and an adultcentric perspective that omits the participation, perspectives and voices of children as enabled subjects and with social, civil and political rights.

Finally, Mercedes shares some questions to “think about” the reopening of education and care institutions, that may  give us the possibility to build not “a new normal” but “a new reality”  in which the democratic perspective of rights can transcend academic discourses into reality, recognizing the citizenship and participation of children and their families, as well as the comprehensiveness, multidisciplinary, co-responsibility, and sustainability proposed in the 2030 Agenda. For this, says Mercedes, it is essential to have a State that cares, that contemplates education as a “tool for the achievement of other rights”, and a public good, with decent working conditions for its professionals, positioned as agents of the State, agents of health and education, with responsible subjectivities to sustain the common, and with critical and reflective thinking about the context and situations that arise, so that new knowledge and proposals are generated.

The latest recommendations of Mercedes Mayol Lassalle, for this context and the near future, are to prioritize children, to carry out an epidemiological and pedagogically safe reopening, with support and family participation, and to essentially ensure inclusive, equitable and quality education as proposed by the 2030 Agenda. Having as a north the conviction that there is a chance of building a better world, learning the lessons of this pandemic crisis.

To see the complete video in Spanish, we invite you to enter the following link

Towards a democratic early childhood education for all -Peter Moss

OMEP belongs to the advisory group “Early childhood and sustainable development, towards a comprehensive care strategy” of the Fund for the Sustainable Development Goals (SDG Fund) of the United Nations in Argentina